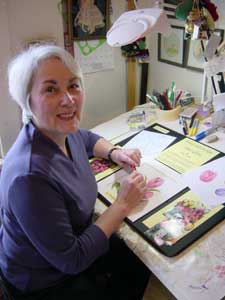 Libby Sturdy is an internationally known designer and teacher and for 30 years has been the owner of Just Libby Designs, a commercial and custom design company, located in Clarendon Hills, Illinois.

She has taught at ANG, EGA guilds, TNNA trade shows, The Callaway School of Needlearts, The National Academy of Needlearts and retail shops around the country and Canada.

Her designs have appeared in “The Stitchery Magazine,” “Needlepoint Now,” the Caron Collection web site as Designer of the Month, and Rainbow Gallery. Commissions have included many churches including the United States Air Force Academy wedding kneelers; special projects for Woodlawn Plantation and the White House Christmas celebrations.

Libby has been called “The Santa Lady” due to her continuing line of custom personality Santas. Now she has added new lines of whimsical animals, snowmen and perky people. She believes in teaching not only techniques in class, but fun too!

See more designs in our catalog